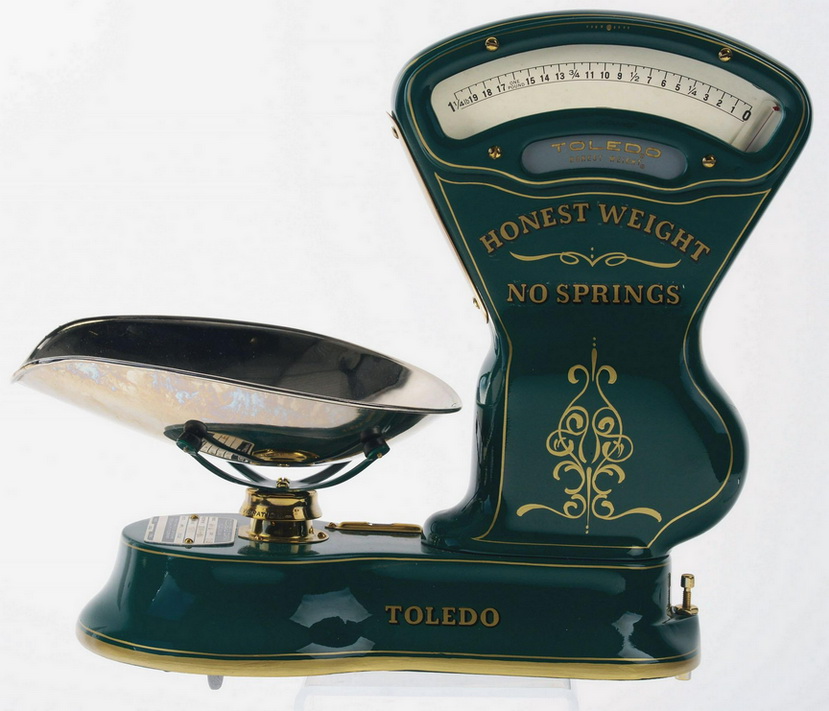 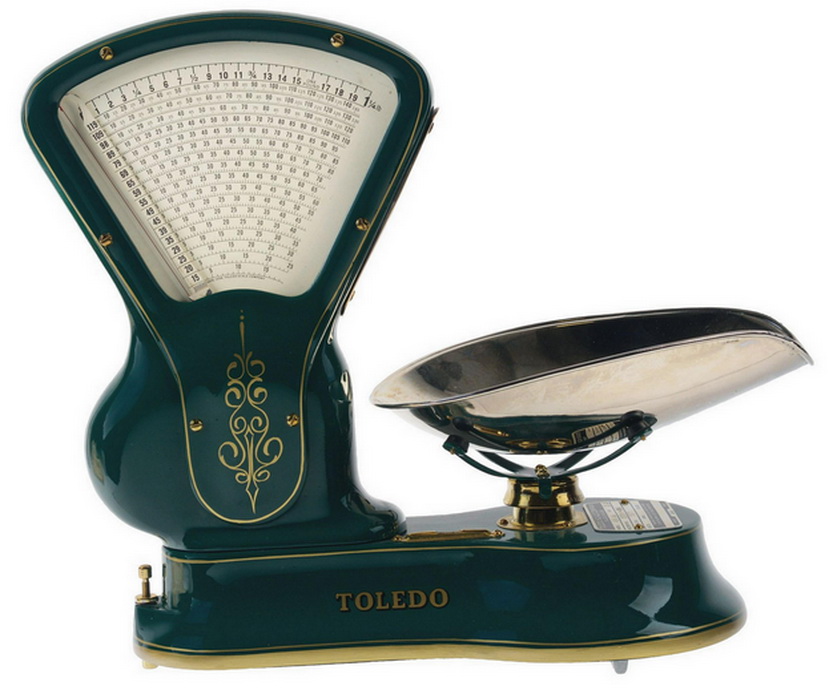 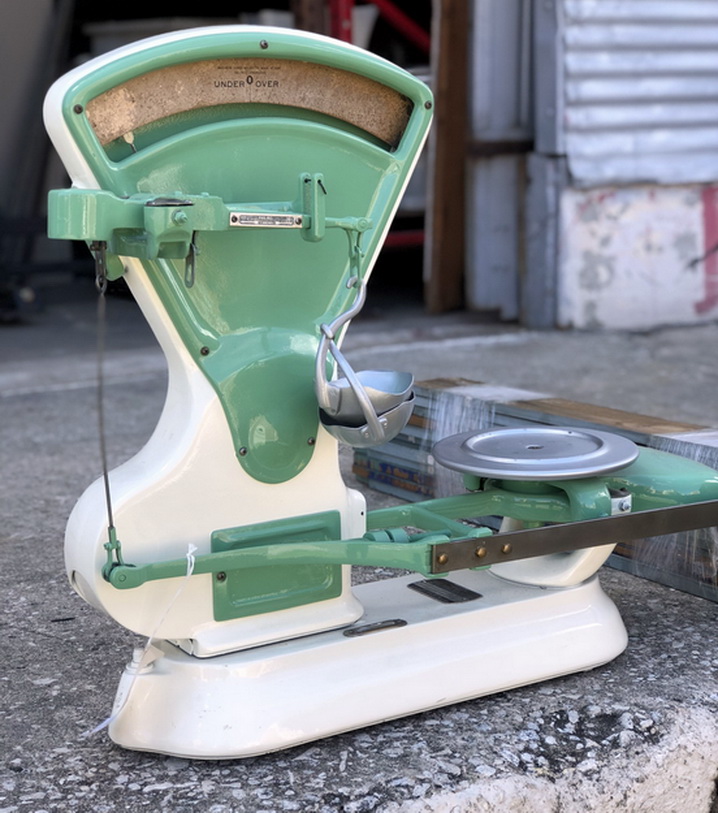 Large Vintage Toledo 40 Lbs. Hardware Store Ratio. Scale Model 3400, measures about 12″ W x 32″ L x 26″ H,
one of the nicest looking scales I have seen,own a piece of history here, Toledo scales have been
manufactured for over a century, founded in 1901 in
Toledo, Ohio, recently refurbished, great collector piece. 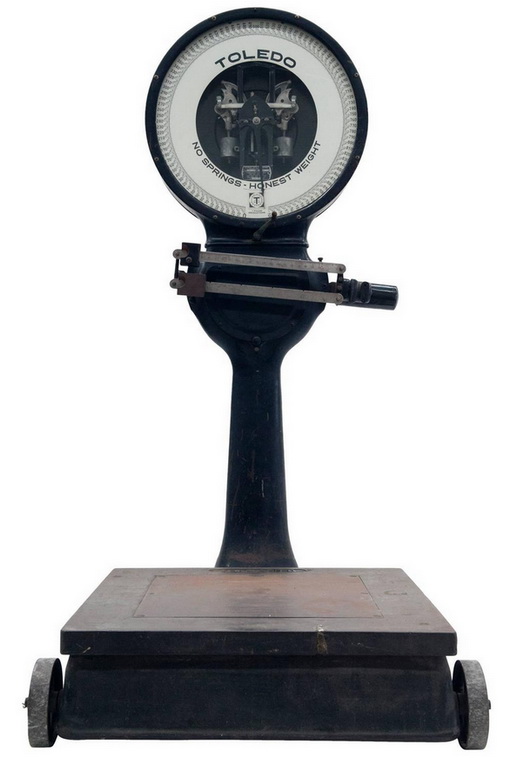 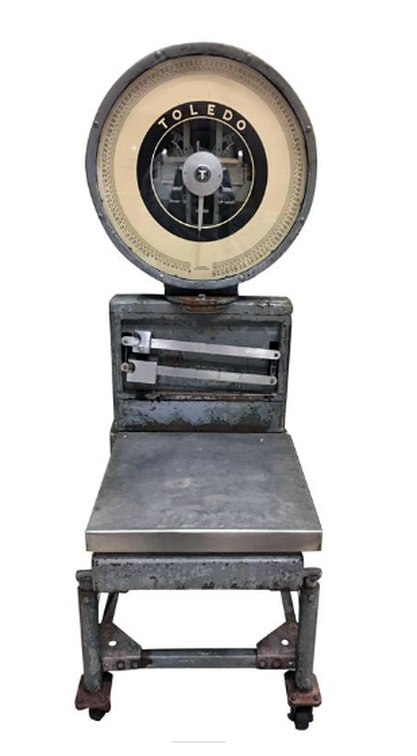 
Allen DeVilbiss, Jr. (1873-1911) was an inventor who lived in Toledo, Ohio, USA. He became interested in the concept of weighing machines and conceived the idea of an automatic computing pendulum scale. He was able to prove his concept with a local butcher, who realized that customers appreciated the automatic computation which eliminated the risk of overcharging. While his invention gained in popularity, DeVilbiss was not interested in making it a viable business.

In 1900, Henry Theobald (1868-1924) was fired from his job at the National Cash Register Company. He decided to start his own business, and was convinced that selling the automatic computing scales could be a good business. He solicited additional financial investors and purchased the company from DeVilbiss. On July 10, 1901, the Toledo Computing Scale and Cash Register Company was incorporated.

By May 1902, Theobald's company was selling more than 100 cash registers with scales per month. By that time, John H. Patterson, Theobald's boss from NCR, threatened to sue the new company for patent infringements. As an alternative, Patterson offered to purchase all cash register patents and property, along with the stipulation that Theobald would no longer engage in the cash register business. The investors, who worried about the costs of patent infringement litigation, agreed to the sale in June 1902. Since cash registers were no longer part of Theobald's business, he changed the name to Toledo Computing Scale Company. Theobald later coined the phrase "No Springs, Honest Weight" as a slogan for the new company.

In the years that followed, Theobald realized that the weighing scale was the most important part of the retail transaction between the merchant and the customer. He felt that many of his competitors who used spring scale technology, especially Dayton Scale Company, were allowing merchants to cheat their customers by incorrectly calculating the total price of a measured good. He campaigned for more government regulation of weights and measures to eliminate dishonest weighing systems. On October 1, 1907, Massachusetts adopted the first weights and measures laws in the United States.

In 1912, the company name changed once again, to Toledo Scale Company. Additionally, a new scale line featuring a double pendulum mechanism and a dial face was introduced and was most suited for industrial applications. 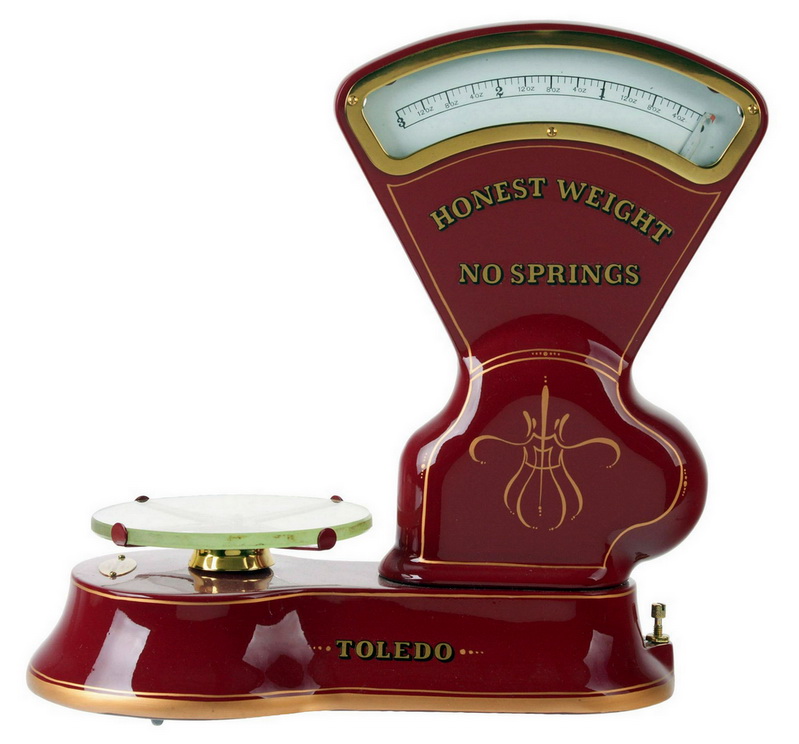 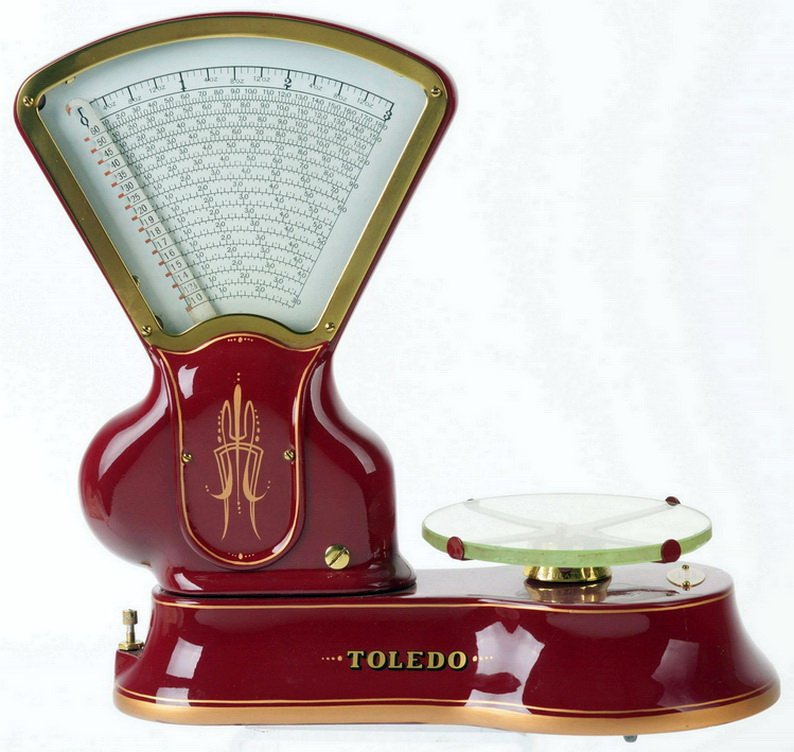 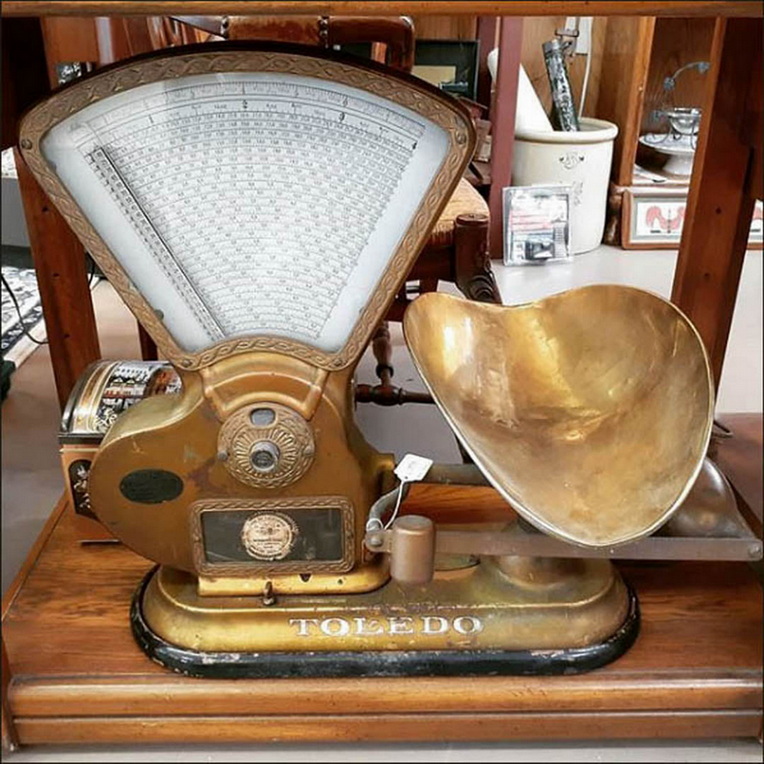 In 1945, Dr. Erhard Mettler, a Swiss engineer, started a precision mechanics company in Küsnacht, Switzerland. He invented the substitution principle with a single-pan balance, capable of being produced in series. Analytical balances with a single weighing pan gradually replaced conventional two-pan balances in the laboratory.

Mettler diversified its product line in 1970 with the introduction of its automated titration systems, and the acquisition of balance manufacturer Microwa AG. Mettler acquired its 500-employee competitor August Sauter KG, of Albstadt-Ebingen, Germany, in 1971, for its specialized industrial and retail scales.

In 1980, Dr. Mettler sold his business to Ciba-Geigy AG. A third pillar - after laboratory and industrial - was created: the retail business. Technological progress had made it possible to advance retail scales to instruments for the management of perishable goods.

In 1989, Reliance Electric sold the Toledo Scale division to Ciba-Geigy AG. The division was then merged with Mettler Instruments. The merger vastly increased the global scope of the company, which, as a result, operated in 18 countries. Mettler acquired another competitor, Ohaus Corp., in 1990. In 1992, the company was incorporated as Mettler Toledo, Inc.

The resultant company is currently headquartered in Greifensee, Switzerland, with offices for its many brands based around the world.